Louisa jones is from Northumberland, now based in London and the South East coast of England. On a trip to the isle of Sherkin off the west coast of Ireland she was introduced to the accordion by musician and painter John Sim. In London she was taught traditional jazz on double bass by Dakota Jim. 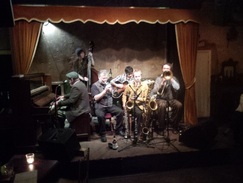 Ewan leads the Cable Street Rag Band in their large repertoire of rare old songs ranging from the rough raggy blues songs of the 20s to the rich luscious ballads of the early 40s.
The Cable Street Rag band are made up of
Ewan Bleach on Vocals, Sax, Clarinet, Piano
Jim Ydstie on Vocals, Accordion, Double Bass, Piano
Louisa Jones on Vocals, Double Bass
John Kelly on Guitar
Magic Mike Henry on cornet
Will Scott on clarinet on clarinet and saxophone 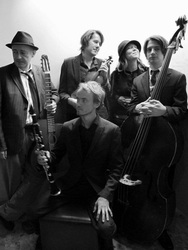 Leading this stunning band are violinist, Thomas Gould and star of London swing, clarinettist Ewan Bleach. This great partnership is complemented by the unique voice of Louisa Jones and a hot rhythm section with Jean-Marie Fagon on guitar and Dave O’Brien 0n the double bass.